On May 10th, Calvert Hall College High School hosted its 4th Annual All Day Hall Day Giving campaign with Almabase, with the goal of surpassing 1,175 donors in honor of its 1,175 students. Leveraging Almabase’s powerful giving module and social media outreach, the school reached 85% of its goal with a total of 1,008 recorded donors. Calvert Hall was successfully able to increase its Giving Day donations by 202% in 3 years.

increase in the number of donors 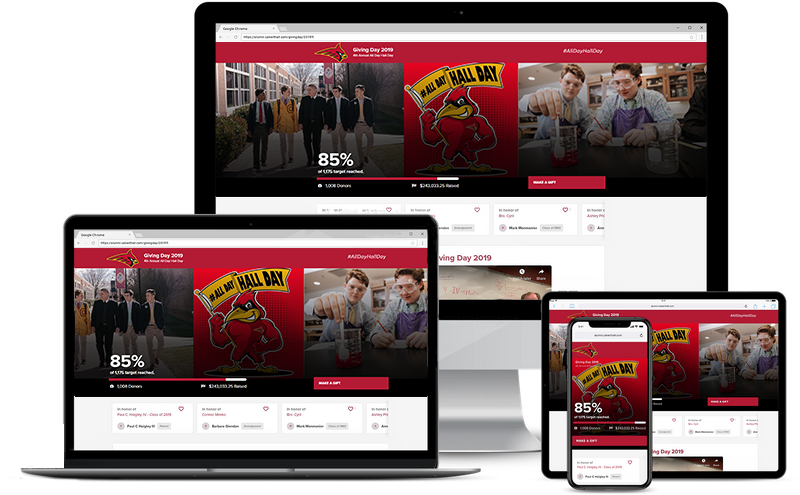 Dating back to the early 1840s, Calvert Hall College High School is a Catholic college preparatory high school for boys, located in Towson, Maryland, United States. The oldest Lasallian school in the country, Calvert Hall College High School provides a diverse community of young men with a broad and balanced human and Christian education through excellent academic and extracurricular programs that promote leadership, achievement, and service within the church and community.

With a total alumni strength of over 7000, Calvert Hall College High School’s aim is to make its students “men of intellect, men of faith, and men of integrity."

While for Calvert Hall, the previous giving days were relatively successful, the advancement team started noticing that some alumni were preferring to donate via their mobile devices. With the school’s existing online giving experience not optimized for mobile devices, their donations were affected.

Lack of real-time visibility into the progress

With existing systems, Calvert Hall did not have visibility into gifts being made. In the absence of a dashboard where fundraising numbers could be broken down into meaningful statistics, the school had difficulty in analyzing its campaigns and planning future campaigns.

With the 4th Annual Hall Day campaign, Calvert Hall was able to successfully increase its Giving Day donations by twice as much since its first giving campaign in 2016. The number of donors also increased by 140% in a time span of 3 years. The two key aspects that helped Calvert Hall achieve tremendous success are:

1. Videos shared via social media: Calvert Hall created interactive videos, featuring faculty as well as students and shared these extensively via social media. Filmed on-campus, these interactive videos had the desired effect of invoking nostalgia and succeeded in urging alumni to contribute to a cause that would benefit their alma mater. Organic social media marketing via Facebook helped Calvert Hall raise over $4800 in 24 hours.

2. Peer-to-peer fundraising: With a following of over 11,000 on Facebook, Calvert Hall’s videos were widely shared by the school’s influencers on the platform, influencing 77 donations and raising over $14,000.

Calvert Hall’s immaculate planning is the key to its Giving Day success. Take a look at the detailed Facebook campaign here:

1. Calvert Hall College High School shared this video 2 weeks prior to its Giving Day campaign. Joe Baker, CAO/Director of Advancement talks about all the events planned for the upcoming 24-hour campaign.

2. In this video, Joe Baker talks about Calvert Hall’s 174- year old ‘Tradition of Excellence’ on the day of giving.

4. Calvert Hall thanking everyone for supporting their All Day Hall Day campaign:

By creating secure, effective, and mobile-optimized giving pages, Calvert Hall is able to provide its donors with a frictionless donation experience. Whether alumni donate from their mobile, iPad or laptop, it now takes less than a minute to complete the donation. The school successfully ensured that making a gift became as simple as placing an order on Amazon.

With the brand-new giving day platform, Calvert Hall made available real-time statistics on the contributions made so that alumni have visibility not only into their own contributions but also those made by fellow alumni.