How Scranton Preparatory School increased its Giving Day donations by 546%

Scranton Preparatory School hosted its first large-scale Annual Giving Campaign with Almabase and successfully raised over $77,000, crossing the estimated goal of $40,000 by 194%. The institution used strategic communication and a peer-to-peer approach to target alumni, successfully increasing its Giving Day donations by 5 times within a year.

increase in Giving Day donations (up from $12,000 the previous year) 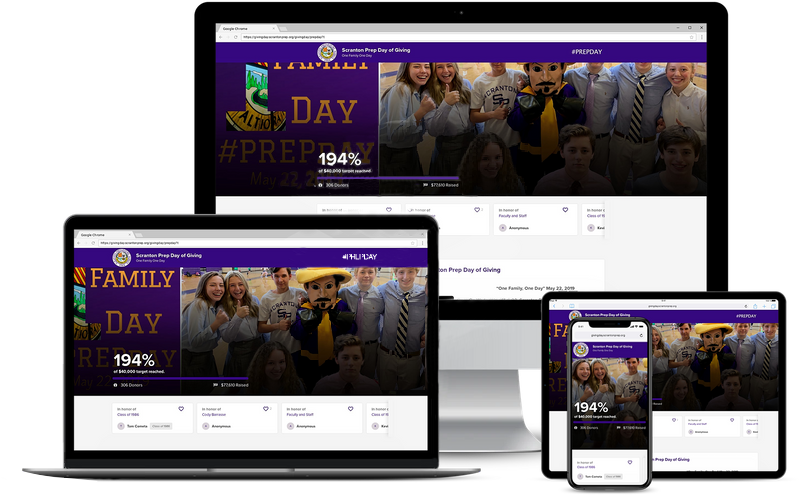 Founded in the year 1944, Scranton Preparatory School is a co-educational Jesuit high school located in Scranton, Pennsylvania, United States. With a total alumni strength of over 8000, the school is fully accredited by the Pennsylvania Association of Independent Schools.

It is a member of the Jesuit Schools Network, Middle States Association of Colleges and Secondary Schools and the National Catholic Educational Association. In 1986, Prep was named a National Exemplary School by the United States Department of Education.

Part of a 4-member advancement, Jeanine Pavuk, Director of Annual Giving, and Posie Granet, Alumni Director, are the driving forces behind Alumni relations functions at Scranton Prep. For an advancement team of this size, managing all engagement and fundraising initiatives for over 8,000 alumni often proved to be a challenging task.

Scranton Prep lacked the experience of running a large-scale Giving Day campaign. Their previous campaigns were much smaller, having raised close to $12,000. The advancement team lacked the know-how of planning and following through with a larger campaign.

Dependency on the technical team

The advancement team at Scranton Prep had to rely on the technical team for certain aspects of giving campaigns such as creating giving pages or adding any customization to these pages, often leading to unnecessary delays.

What did Scranton Preparatory School achieve after implementing Almabase?

Here’s a comprehensive view of what Scranton Prep’s marketing plan looked like:

Scranton Prep leveraged the power of social media to spread awareness about its upcoming ‘One Family, One Day’ giving campaign. The school created an extensive marketing plan, sharing regular updates via Facebook and Twitter. Other than sharing updates with alumni on the day of the campaign, Scranton Prep ensured to post relevant content much ahead of the Giving day with the intent of generating curiosity and keeping alumni engaged.

Below are some examples of the school’s creative use of social media for the promotion of its Giving Day:

Apart from sending generic emails inviting donations, the school divided its alumni into different class groups and targeted them with a peer-to-peer approach. Emails from peers helped create a personalized touch and acted as a strong incentive for alumni to contribute.

In addition to the peer-to-peer outreach technique, Scranton Prep planned ahead and ensured that its alumni kept hearing about its upcoming Giving Day via generic emails.

Here’s how Scranton Prep kept its alumni informed about the ‘‘One Family, One Day’ giving campaign.

As a result of this well-defined marketing strategy, Scranton Prep was able to give a huge boost to its donations and engagement.

Scranton Prep was able to provide its alumni with a friction-less, secure donor experience. Whether alumni were donating from their mobile, iPad or laptop, it took less than a minute to complete the donation. The school ensured that making a gift became as simple as placing an order on Amazon.

Scranton Preparatory School continues to host successful Giving Days with Almabase. You can see their ‘One Family, One Day’ Giving page here.