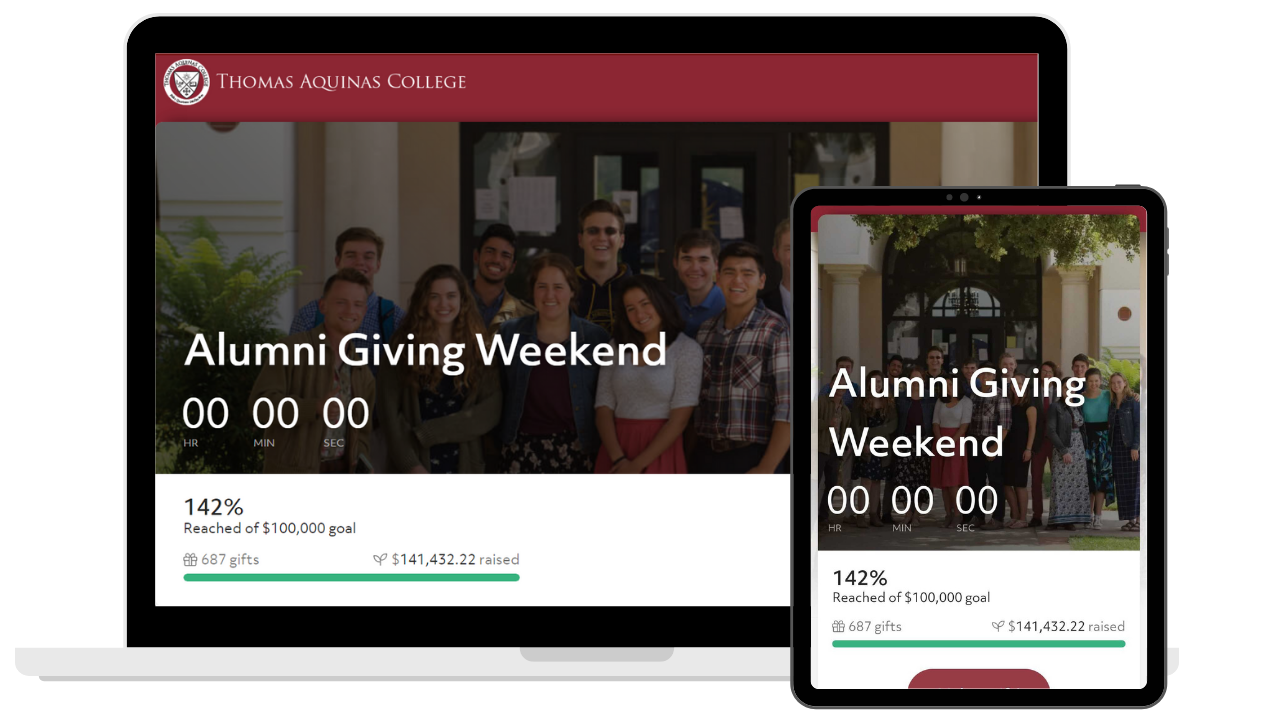 Thomas Aquinas College is a private Roman Catholic Liberal Arts College, with campuses in Ventura County, California, and Northfield, Massachusetts. The College came into being in the late 1960s and early 1970s, during a time of great tumult in the United States that deeply affected the country’s institutions and its mores. The College’s founders, a seasoned group of Catholic educators, were concerned about the declining condition of higher education and, in particular, Catholic higher education.

Today, they have a 46-member faculty, and more than 3,000 Alumni residing in 50 states and 14 countries around the world. The college has bagged numerous accolades along the way, such as “#1 Best Value in Private Colleges” by Kiplinger’s and “Best Value” by US News & World Report.

Thomas Aquinas College was initially using a simple online form that was connected to their main website. This form had its own shortcomings - for one, it wasn’t dynamic, and could only display a small amount of information at a given time. The College was restricted in terms of how they could entice more participation from their community. There was no way for the College to engage with donors and people who visited the page, thereby limiting the impact of the overall campaign. A static page also limited them from marketing the campaign to the page’s visitors.

Inability to show progress and participation in real-time

Another shortcoming of using a static webpage was the inability to monitor and showcase real-time metrics. For instance, the College could not feature participation rate, number of donors, and real-time leaderboards on their form. The page also limited them from executing many of their ideas to raise more funds, such as matching gifts, community challenges, and a raffle with an exciting prize for the winner (which in retrospect proved to be a key factor in their overall Giving Weekend success).

Another hurdle that Thomas Aquinas College had to tackle was the low participation rate from younger alumni. While the donation rate was significant among older alumni, participation from more recent graduates needed a boost. A few possible factors leading to disengaged young alumni could have been lack of engagement on the website and on social media. Financial stability also has a direct impact on participation, as young graduates early into their careers are much less likely to make a monetary contribution.

What did Thomas Aquinas College achieve after implementing Almabase?‍

When it comes to alumni donor participation rate, Thomas Aquinas College has cemented itself a ranking among the top ten institutions in the U.S. With the help of Almabase and an alumni-centric strategy, the College was able to execute different ideas to boost participation throughout the Alumni Giving Weekend campaign. The platform allowed them to gamify certain aspects of the campaign to get more alumni to participate and show their love. What’s more, the College was also able to showcase key metrics like participation rate, influencer leaderboards, class leaderboards, the total number of donors, and real-time campaign progress measured by a live fundraising thermometer.

Here’s what the College did to drive higher participation from alumni:

‍The campaign page showcased interactive leaderboards featuring top donors and participation from different class years. This FOMO created a competitive atmosphere that enticed alumni to get in on the fun and show their support for their alma mater.

‍A great way to create a spark and ignite a donation chain among alumni is by gift matching and introducing fun challenges. Thomas Aquinas College had matching gift challenges at regular stages of the fundraising goal, and each of them was met with enthusiasm and increased participation from donors.

A chance to win an exciting, week-long vacation

‍To sweeten the pot for donors, the College also sponsored a raffle that would grant one lucky winner and their partner a Luxurious 7-Day Cruise for Two on Holland America Line!

Consistent engagement and participation from the community

Besides finding ways to gamify the fundraising campaign, the College also used the platform to engage with donors through their alumni-centric engagement strategy. This way, the College made the entire process more of a fun activity where both sides get to interact and show their support.

The College also utilized their campaign page to share a heartfelt message from the President of the Alumni Association, Peter Colarelli, where he appeals to alumni to contribute and #PayItForward.

Thomas Aquinas College also made use of the “Live Honor Wall”, featuring the most recent donors, driving participation to the next level. This wholesome approach to raising funds humanized the entire campaign, which was certainly a big factor in the success of the campaign.

Using Almabase, the College had access to dashboards that offered key insights into the performance of their campaign. These insights offered the College complete end-to-end visibility, from who visited the campaign, right down to who influenced more gifts. The College had access to information that could empower future campaigns. With one-click access to downloadable reports, the platform helped Thomas Aquinas College drive better fundraising and engagement decisions for the future.

Head over to the College’s alumni website to get a better understanding of their alumni-centric engagement strategy.

Read more...
How Misericordia University Transitioned To A Virtual Homecoming Celebration Amidst The Pandemic

Like hundreds of institutions adhering to social distancing norms amidst the pandemic, Misericordia University went completely virtual for its Annual Homecoming in 2020. Keeping the health and safety of its community as the utmost priority, the Misericordia Alumni Relations Team planned a series of virtual alumni-centric engagement initiatives throughout the day and also encouraged members to donate in support of their beloved students. The university successfully transitioned to a Virtual Homecoming format, finding creative ways to drive high participation and provide value to alumni.